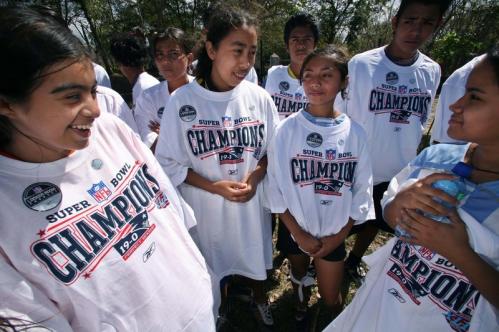 From the Business Insider:

“The Giants may be America’s Super Bowl champs, but there will still be one place in the world where the Patriots’ sorry dreams of a perfect season live on: Nicaragua. Thousands and thousands of unsold caps and T-shirts printed with ’19-0′ and ‘Patriots Super Bowl Champions’ have been donated to a charity that will ship them next week to the impoverished Central American country. As soon as the gear arrives, poor children across Nicaragua will be transformed into unwitting members of Patriots Nation.”

When I lived in Nicaragua, it was always amusing seeing the out-of-place T-shirts, including tens of thousands of Branson, Missouri T’s and the odd “I had a blast at Beth’s Bat Mitzvah.”

Written By
Joshua Berman
More from Joshua Berman
Sarmishtha lives with her parents and her brotherâ€™s family. The two-story house...
Read More