The best way to see the oldest inhabited city in the Americas is at dawn, on foot, with a camera in hand. Granada, Nicaragua has been painstakingly restored by a new generation of homeowners and the colorful colonial architecture glows when illuminated by sun, which blasts across Lake Cocibolca (“sweet sea” in Nahuatl) and splashes against cathedrals. The only other people on the streets early in the day are blue-and-white uniformed children riding bicycles to school and street vendors carrying baskets of vegetables and fruit.

But the glory of Granada is not just its pretty charm and deep history. Its location – an hour from the airport in Managua, surrounded by natural and cultural attractions – has made it the center of Nicaragua’s rising tourism industry. Granada’s many hotels and B&Bs offer a long menu of day trips, making it an easy base camp for travelers looking to explore one of Central America’s more chaotic countries. 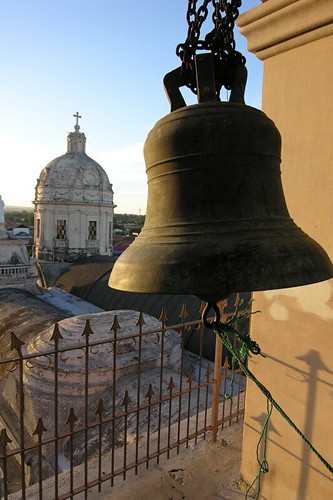 Walking up Calle la Calzada, where many tour operators are based, visitors can see the trip possibilities listed on signs and chalkboards: Visit the markets of Masaya; ascend the Masaya and Mombacho volcanoes; shop the artisan villages of Pueblos Blancos; swim in Laguna de Apoyo. The best option – and they are all good options – is also the most convenient: Kayaking in Las Isletas, an archipelago of tiny islands that appear to float along the shores of Lake Nicaragua, the nineteenth largest body of fresh water on earth, is more about drifting than pulling. The volcanic specks of land are home to birds and host a few casitas, which look out on the water from their tiny plots. Wave to the men smoking cigars on the open porches or casting lines into the lake.

After a paddle, head back to Granada to walk through the churches, markets, and plazas. The biggest of the latter, Parque Central, a large tree-shaded, bird-filled square in front of the main cathedral, buzzes in the mornings, making it a good place to end an early-morning walking tour.

Greet the sunset from the bell tower of Iglesia La Merced, which floats above an ocean of clay tile roofs. Watch as the sky fills with stars and Granada’s denizens – many of them members of Nicaragua’s political elite – come out to chitchat on their front stoops or relax in rocking chairs while sipping Nica Libres, a combination of Flor de Caña rum, lime, ice, and just enough Coca-Cola to give it some sweetness and color. Despite the age of the city, the beginning and end of each day is still treated with ceremony.

More information: Delta, United, and TACA fly into Managua International Airport, which is connected to Granada by a bus that runs from the terminal every half hour.

Written By
Joshua Berman
More from Joshua Berman
To travel is to disappear. At least it used to be, before...
Read More