This article was first published in The Denver Post on May 30, 2017

Scroll down for videos and more photos

CAÑON CITY — The dig of the paddle, the lean-in drop, the splash! Across the narrow bow, my friend Sean was grinning ear to ear; I realized that I was, too, as we slid down Sunshine Falls and an icy dousing of Arkansas River ran into my helmet and down the back of my wetsuit. I gulped a quick breath of 40-degree air and squinted ahead to the next rapid.

Sean and I were on a brief, rare vacation from our families. For the moment, adrenaline kept us warm and jazzed. After all, we hadn’t been on a river together since 1997, when we paddled a canoe down 125 miles of the Green River in Utah. A lot has happened in our lives since then, and our 20-year river bro-versary seemed like a decent excuse to travel.

Then we found a rafting company that also had a campground with furnished wall tents and luxury loft cabins. We could have an appropriate river adventure and also glamp it up and explore the entire Royal Gorge region in style.

The area has worked hard to recover from the 2013 Royal Gorge Fire and there were several new attractions to check out, including the new-and-improved Royal Gorge Bridge and Park, the Dinosaur Experience, the Holy Cross Abbey Winery, and, to top it off on our final night, a prime rib dinner aboard the Royal Gorge Route Railroad.

But first, a freezing baptism with my brother-from-another-mother, immersed in snowmelt from the Sangre de Cristo mountains. Sean shot me another this-is-awesome look as we rounded a bend and spotted the famous Royal Gorge Bridge, 1,000 feet up.Then we heard a low roar from up ahead.

“If you fall out in Boat Eater, swim to the left!” shouted our guide Ashly Parmer. Boat Eater is one of the 17 class III and IV rapids we shot that day.

On our previous canoe adventure, Sean and I had been alone in the wilderness, dipping our paddles in tranquil silence for hours at a time. This rapid-fire, deep-canyon, side-by-side, shouting-guide thing was an entirely different animal. We had a crew behind us, cold river all over us, and a cleverly mounted GoPro camera in front of us, capturing every grimace, grin, and holler for our young daughters back home (Sean has one and I have three).

We kept digging, diving downstream; past the bridge, past the train, past a great blue heron as it took off and flew, floating beside us for a moment and then banking back upstream.

Echo Canyon River Expeditions is a rafting company, campground, and adventure resort located nine miles west of Cañon City on U.S. 50. From Memorial Day to Labor Day, the nine luxury loft cabins start at $345 per night. Glamping wall tents accommodate up to four people (one queen bed and sofa sleeper with linens) and have a fire ring, electricity, Wi-Fi and community bathrooms, from $149 per night. Tent sites are $49 per night. All have views of the Sangre de Cristo mountains. Reservations: raftecho.com or 800-690-3246.

Echo Canyon has an innovative GoPro mount system on the bows of their rafts—and a selection of photo/video packages for their clients. Sean G laid some live music from his band, Big Paddy (FFS!), over the footage from our float last week:

The next day we got another perspective of the Arkansas River, from 1200 feet above, on the Sky Coaster drop at Royal Gorge Bridge and Park, “Wild Rover” style:

And here’s Sean G’s own POV footage and epic drum solo as he zips across the gorge itself. As Grant, one of our raft guides had said the day before, “It’s a great day to be alive!”: 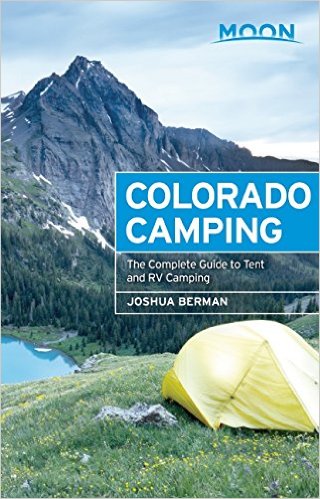 This fifth edition of Colorado Camping was released in April, 2016. If you are looking for the perfect place to camp in Colorado, your trip starts with Moon Colorado Camping. It's the ideal resource for finding campsites—from secluded alpine hike-in spots to convenient roadside stopovers—throughout the entire state.