Kersey — After breakfast, we bundled up against the wind and walked behind the barn, where a crew of wranglers clad in denim, leather, and smiles had arrived from somewhere down the Front Range. My daughters watched in awe as they unloaded their horses. 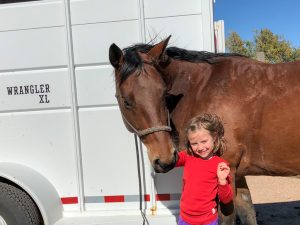 “You want to say hi to Rye?” said a young woman with high boots, a rodeo jacket, and blond hair to my middle daughter, catching her eye and waving her over to the bay horse at her side. Thus began a 4-hour girl-horse friendship that she’s still talking about today.

We were at the Platte River Fort Event Center, just northeast of Greeley, a replica of the iconic Bent’s Old Fort National Historic Monument, itself a reconstructed 1840s fur trading post outside La Junta. This version was not only closer (only an hour’s drive from Denver or Boulder), it also had a selection of nicely appointed rooms, suites, yurts by the river, and a single canvas-covered Conestoga wagon, outfitted with a little heater and beds to sleep four.

That’s where we’d woken up, in the wagon, a family of burly pioneers. We’d survived the cold front that had moved in during the night, its winds trying to get through the canvas and gently rocking us as the heater kept things just above freezing. After breakfast in the fort, we were getting ready for the main event of our 24-hour Old West agritourism retreat: a real-life, Saturday morning roundup. Hired hands would help gather, then separate the Texas Longhorn calves from their mothers, for vaccination and branding. It is an annual event on most working ranches, and, the owners figured this year, why not invite guests to come watch?

The cattle, by the way, were “just pets” (i.e. not sold for meat) according to one of the owners, Dori DeJong. She actually grew up on the neighboring property, so when the opportunity came up to add this piece and the fort, she took it. Platte River Fort Event Center is popular for weddings and is also used for corporate retreats. They operate year round, and guests normally do things like hike along the riverfront, or try their hand at archery, skeet shooting, cross-country skiing, and carriage rides, or just hang around the central lodge, which affords nice views of the Continental Divide. And, once or twice a year, guests can bust around in an ATV and watch an important ranch activity.

It was a long, exciting, cold morning—the wranglers got the herd close to the gate several times before half the cows scattered and the horses had to re-set their approach. We kept zipping over the wind-blown floodplain for the best view, my family bundled up under blankets in the back seat.

Finally, all the doggies were in the corral, the animals separated by age, and the vaccines and brands delivered to the calves. After chow time in the fort, my kids said goodbye to Rye and her handlers and we drove off into the afternoon sun.

Colorado Model Railroad Museum in Greeley is incredible, especially for families. They are open every weekend and have seasonal events happening.

For more on Greeley and the region, including holiday events, go to: www.visitgreeley.org

This article was first published in The Denver Post on November 26, 2017.

Written By
Joshua Berman
More from Joshua Berman
I wrote a short article in the current newsstand issue of Outside...
Read More