This article first appeared in the Fall 2021 edition of AAA Colorado EnCompass magazine. 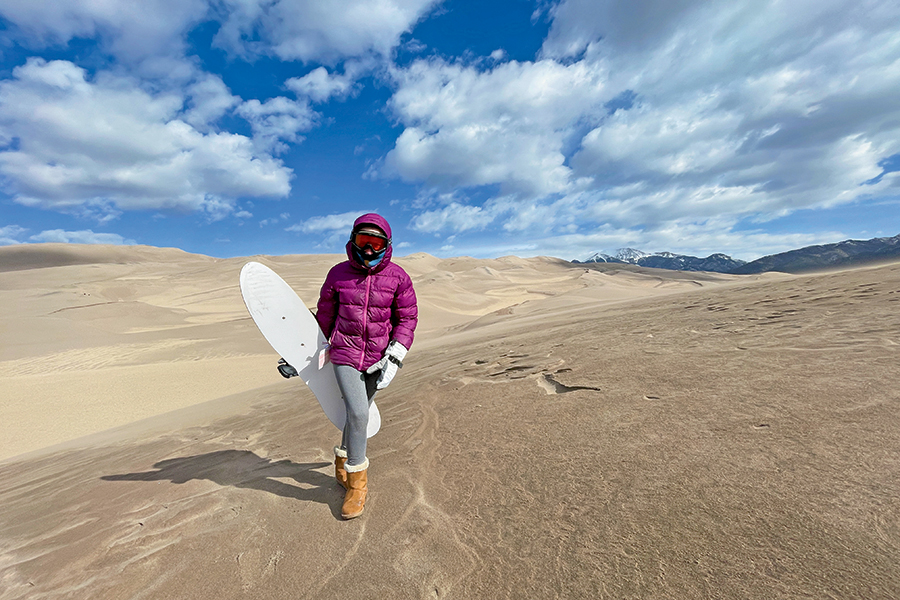 In the south central part of the state lies the San Luis Valley, an 8,000-square-mile high-elevation expanse extending from the Continental Divide southward to New Mexico. It’s an area so enormous it generates its own weather and geography, which my daughter and I experienced when we visited last spring. It was our first day and we were driving south on Highway 285, through Villa Grove and Saguache, and then into the Monte Vista National Wildlife Refuge. Rolling across a narrow causeway, we saw the first dust storm, a tan wall of wind and dirt bearing down on us. We’d seen several on our way here—storms like squashed tornados raging straight across the valley, momentarily reducing visibility to near zero as they sweep over your windshield. Though temporarily inconvenient for travelers, they’re also a part of a much longer timescale, picking up sand particles and depositing them on the famed dunes on the valley’s eastern edge.

Admiring the weather while it whipped around us as we storm-chased through the refuge, we stopped at one pull-out, and I fought the wind to open my door. When I got outside, I was nearly knocked over, eyes burning from the dust. The squall moved on as quickly as it had come and we kept driving, around its back end now, on our way to the next attraction.

The San Luis Valley is impressive not only for its expansiveness, but also for its eclectic, offbeat attractions, connected by wide-open, two-lane farm roads. To wit, that day my daughter and I had pie and coffee in Crestone, an epicenter for a variety of world religions and spiritual practices at the base of the Sangre de Cristo Mountains. We followed that with a visit to the UFO Watchtower. in Hooper, created by landowner Judy Messoline, as a place for UFOlogists and curious minds to come search for the extraterrestrial. The attraction features a 10-foot observation tower, a healing garden, campground, and gift shop. It’s yet another roadside touchpoint to the area’s alleged elevated energies. The sign at the entrance to the garden reads: “Since opening the UFO Watchtower in 2000, over 25 psychics have visited and told the same story…there are two large Vortexes located on the east side of the Tower. A Vortex is described as an opening to a Parallel Universe.” The San Luis Valley’s roadside attractions include the UFO Watchtower and Campground, guarded by this alien “resident” in the energy garden. © Joshua Berman

You can follow your Vortex alignment with a tour of the Colorado Gators and Reptile Park, in Mosca, a kind of accidental reptile zoo and crocodile farm atop a geothermal swamp. What started out as a Tilapia farm, where they brought in baby alligators to dispose of the fish remains, has grown into a sanctuary for unwanted exotic pets. It’s as funky an experience as it sounds.

Twenty minutes down the road is the agricultural town of Alamosa, and a nice respite from the road and a great home base for most of these activities, with several AAA-approved lodgings and restaurants from which to choose, The Alamosa Visitor Center, by the train tracks, can tell you about ArtScape downtown and Blanca Vista Park, as well as any upcoming events.

To end our first day, we grabbed some takeout rice bowls from Locavores, a local favorite, before scooting back up to the Joyful Journey Hot Springs, just north of Moffat. This literal oasis in the flat valley floor offers a number of yurts, campsites, and a family-sized casita, all with access to several thermal pools. Here the water is kept between 98- and 108-degrees Fahrenheit, “a sodium bicarbonate type with significant levels of boron, calcium, lithium and magnesium,” which makes for calming waters. It’s not a bad way to ease into our exploration. 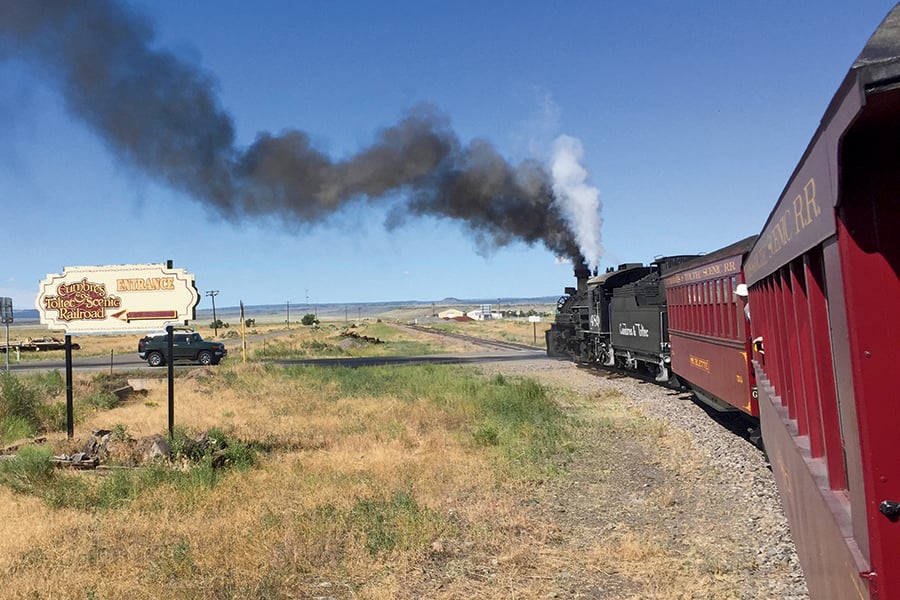 The Cumbres & Toltec Scenic Railroad chugs into Antonito after a trip up to Osier Pass. © Joshua Berman

I rose early for a sunrise soak while my daughter slept. The mineral heat of the water, the soft orange light seeping through the steam, the promise of another day of discover…ahh.

After breakfast, we hit the Great Sand Dunes National Park and Preserve just as the park opened. We had rented sandboards from Kristi Mountain Sports in Alamosa, and carried them over the sand, until we found a suitably steep run. We tumbled, slid, scrambled, and laughed, all while the winds kept getting stronger and colder, and carried more and more grit. Even though we’d prepared with winter shells and ski goggles, we were finally defeated, shivering but fulfilled, departing the dunes for Alamosa to return our boards and head south to our next adventure in Antonito.

We had planned to ride the “Highest, Longest, and Most Authentic Steam Railroad” in America, and in my opinion, one of the best overlooked gems in the state. Alas, the Cumbres & Toltec Scenic Railroad was not yet running for the season, and we settled for a few shared memories from when our family last visited and rode those historic rails, a few years earlier.

This year, the Cumbres & Toltec is celebrating its 51st season of running coal-fired steam locomotives between Antonito, Colo., and Chama, N.M. The railroad is co-owned by the two states, and in fact, the train crosses the border 11 times. The Cumbres & Toltec has been featured in more than 40 motion pictures, including Indiana Jones and the Last Crusade. It chugs out of Antonito, through Toltec Gorge, over Cascade Trestle (137 feet above a roaring river), and tops out at 10,015-foot Cumbres Pass, the highest point reached by any steam railroad in North America. There are several day-trip options (lunch near the high pass at Osier Station included) out of either Antonito or Chama, and the season ends in late October. The unique accommodations, “Camels and a Yurt,” delivered as promised. © Joshua Berman

I would say my family and I are not your typical vacationers when we travel. We like to find locations and places to stay that are unique and different. Well, I found that something different, way outside town, called “Camels and a Yurt.” I’d found it on Hipcamp, a kind of AirBnB for interesting campsites, cabins, and other unique accommodations. We left the highway, all unmarked dirt roads now.

According to a message my host had left me with his farm’s coordinates, “Navigation systems don’t work.” So, we heeded his written instructions, up the driveway, past a sagging homestead building, and “No Trespassing” signs. Upon our arrival our host, Matt, greeted us and gave us a tour of the farm, along with his various herds and flocks—six camels, 55 fowl, a family of donkeys, and four friendly barn cats. As we met each animal, scratching the friendlier camels on their heads and ears, Matt told us that camels existed in this region until about 11,000 thousand years ago, and there are ancient pictographs and fossilized bones to prove it. The animals certainly seemed at home, especially the new mother walking in front of the setting sun—her three-week old, curly headed baby loping after her through the sage.

Matt then led us to our accommodations for the night. The yurt had two beds, a wood stove, coffee and tea fixings, and a pioneering feel, especially one with actual homesteads from the 1800s just outside the door. You could imagine people surviving in this corner of San Luis Valley, or going farther back, to herds of native camels, horses, and mastodons.

Soaking it all in

Guests enjoy soaking in the pools on the bank of the San Juan River at The Springs Resort and Spa, in downtown Pagosa Springs. © Joshua Berman

We spent sunrise greeting the donkeys and camels, who had emerged from their barn for a drink. My daughter communed with the cats, while I took more photos. After breakfast, we were off for Pagosa Springs, 90 miles to the west and south.

As a tourist town, Pagosa Springs has been humming steadily along this year, with only a couple weeks’ closure due to the initial pandemic in Spring 2020. The Visitor Center continues to play it safe, handing out branded bandanas as face coverings, along with social distancing tips, and takeout and dining recommendations. They’ve fared so well because all the attractions are outdoors.

There are three places to soak in the famed waters of the mother spring—and they’re all downtown: The Overlook Hot Springs Spa, Healing Waters Resort & Spa, and The Springs Resort & Spa. The Springs Resort has 24 pools next to the San Juan River that range in size, as well as temperature, from 83–114 degrees Fahrenheit. The enriched water is drawn from the deepest hot spring in the world, and the riverside property is one of the largest hot springs facilities in Colorado. Guests at The Springs Resort onsite hotel have 24-hour access to the pools, which, during the day, are shared with a limited number of day visitors, like us.

We enjoyed snacks and drinks at The Springs’ outdoor bar, then for dinner we called in meatball subs and alfredo pasta from Mountain Pizza and Taproom to take back to our cabin. We love the convenience of the drive-thru takeout window Mountain Pizza had set up in the alley next to the main restaurant on Main Street, which also offered dine-in seating and a big pleasant outdoor patio.

Next morning, it was a mere 25-minute drive to Wolf Creek Ski Area (scheduled to open for the 2021-2022 season sometime in October), just over the pass, where my daughter and I cruised all the bluebird day on snowboards we’d rented from Pagosa Ski and Bow Rack. The spring snow was perfectly forgiving, and we drank it up, taking a break for burgers on the deck outside the main lodge, where the outdoor food-ordering system featured a bartender taking drink orders from those online for lunch.

That evening, we returned to The Springs Resort for their famous ski-soak combo, staying in the warm, sulfur-smelling water hours longer than we’d planned, until it was dark. The air continued to cool, the water remained hot, and my traveling companion and I continued to soak in as much south central Colorado as we could, before the long, beautiful drive home in the morning.

Watch your inbox for more things to do in the South Central Colorado in the next EnCompass Exclusive e-newsletter—a monthly email that provides exclusive content you won’t find in the print edition. Plus, keep an eye out for the next series of “Three Days In” in the Holiday 2021 (November/December) edition of EnCompass.

Written By
Joshua Berman
More from Joshua Berman
Key bike maintenance to do this spring as you bring out your...
Read More