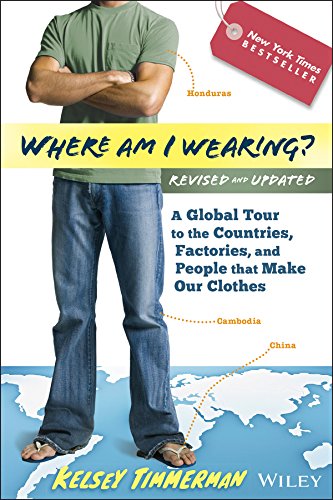 Where am I Wearing?: A Global Tour to the Countries, Factories, and People that Make Our Clothes is an impressive debut bookâ€”a clever concoction of memoir, travelogue, and narrative nonfictionâ€”by Kelsey Timmerman, popular travel blogger and the original Traveling Touron.

In Wearing, Kelsey takes us on a decidedly different kind of journey than the other titles on the “travel lit” shelf, most of which are macho/romantic memoir clutter. Kelsey travels to the garment industry countries where his clothes were made, a seemingly simple proposition which arose not from any academic/journalist rigueur, but rather the sheer curiosity that came from reading the tags on his t-shirt, boxers, jeans, and flip-flops one day. That meant going to Honduras, Cambodia, China, and Bangladesh. So he went.

I was wary at first—I saw the potential for this being either too big a task to take on, or hopelessly quixotic—but Kelsey pulls it off with considerable style as he bumbles his way into factories and garment workers’ homes around the world. He connects with people very different from himself, and the reader is right there in the cramped room with him. As one reviewer observed, “Timmerman is a fun tour guide, rather than a stern moralizer. His quest to find community around the world is an inspiration to anyone beginning to ask whatâ€™s been lost in the new global economy.”

And that’s the rub—that Kelsey’s self-dreamed “quest” actually is important, as are his honest realizations about the individuals who make our clothes: “We might not share a religion, a language, or politics, but we share change and the burden it puts on our families and traditions,” he writes. The author also avoids the easy trap of, as he describes it, inspiring pity and crying sweatshop. “What’s not easy is coming to to terms with the context in which the factories and workers exist and initiating dialogue based on this.”

Not easy, but Kelsey takes a shot at it and in the process lets his journey take him (and his readers) to a village in China and a bowling alley in Bangladeshâ€”among other unexpected settings. In addition to calling attention to an important issue at a crucial time, Kelsey also proves with Wearing that, if you are creative and have the traveling will, it’s still quite possible for anyone to dream up and execute a global quest. I thank him for that.

Where Am I Wearing official Wiley publisher page

Where Am I Wearing on Amazon.com

Written By
Joshua Berman
More from Joshua Berman
These are good times for volunteer vacations; though publications like Transitions Abroad...
Read More