TRAVEL STORIES: Joshua Berman spent a glorious summer exploring some of America’s most beautiful wilderness areas — with a drip torch in hand

FRENCH GULCH, CA — That summer, my job was to burn, to lay flame across the earth and watch some of America’s most remote and spectacular wildernesses go up in columns of black. It was beautiful.

“Burn all, burn everything. Fire is bright and fire is clean,” wrote Ray Bradbury.

But instead of destroying books with flamethrowers, as the futuristic firemen of “Fahrenheit 451” did, our job was to burn forests. Mostly, we used drip torches—heavy, metal cans with crudely soldered handles. These were the tools of choice for manual ignition, clutched in leather gloves, diesel-mix sloshing inside. When the terrain didn’t favor torches—when the fuel (trees, brush, and grass) was patchy, or farther than arm’s length away—we had other methods. We dropped ping-pong balls of napalm from helicopters, set off small bombs in thickets of brush, and shot flaming disks from pistols.

As if none of this was fun enough, we were also mobile, making that fire season one of the most memorable (and lucrative) traveling summers of my life. I worked for the National Park Service, roaming from parkland to parkland, charting our success by numbers of acres burned and number of overtime and hazard-pay hours earned. Not much else mattered. The kicker was, for most wildland firefighters I knew, that money saved in fire season was money spent soon after—usually on travel—when our jobs ended in late fall.

But first, we burned. The idea was, the more land burned, the less fuel there was to go up later. In essence, we were fighting future fires by beating them to the punch. With each new record-setting blaze burning out of control on the nightly news, we learned that treating fire as an invasive, evil force instead of a restorative one, and trying to completely exclude it from our wildlands, was an unnatural, impossible, and ultimately disastrous approach. 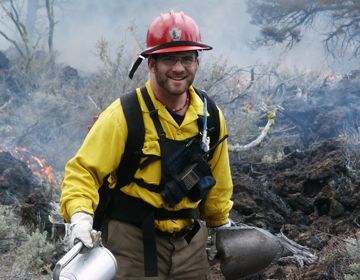 That’s where we came in—the Whiskeytown Fire Use Module. Our mission was nothing less than to restore fire to its natural place in the forests, a noble if tricky and virtually impossible task. Ours was a burly, seasoned crew which included an ignition specialist, a fuel expert, a botanist, a law enforcement specialist and a chainsaw prima donna.

I was none of these. I was a last-minute seasonal hire with little experience—a warm body dressed in crisp, unstained yellows. I’d shown up at a local park headquarters looking for a trails job, just something to get me outside and pay my rent. Next thing I knew, I had a walkie-talkie strapped to my chest and was riding in my first helicopter. It was a boyhood fantasy come true.

Our boss, Brad, wanted other fire crews we encountered to know that our crew was different, which it was. He liked to brag, “We roll with eight chainsaws and four laptops.”

We worked on two-week assignments, sometimes longer, sleeping in tents near the burn, or in backcountry ranger cabins stocked with rations for mounted parkies on patrol. Each evening, filthy and ravenous, we ate by the campfire, trading exhausted banter and, sometimes, watching distant thunderheads and cheering them on.

One late summer night in Sequoia-Kings Canyon National Park, we were standing and eating, stuffing ourselves after another 12-hour day mucking through black, wet ash. Blue and white flashes filled the northern sky and we hurrahed each one. There was fire in those clouds, and there was money too—cumulus overtimus, we called them, looking up at the sky. The next morning, we hiked out to the station in search of news about our next assignment.

“Big lightning bust in Yosemite,” said Brad as he walked across the parking lot toward our tobacco-spitting, pine cone-kicking assemblage. The mop-up we’d just completed had not been glamorous and we were eager for a change of scenery.

“It was that show we saw last night,” said Brad. “Twenty-two starts.”

Justin let loose an elbow-pumping, cash-register “Ka-ching!” James smiled between Wolverine-sideburns, and Johanna did an uncharacteristic little two-step. A few hours later, our small convoy of rescue rigs and two diesel pick-ups was winding up the spine of the Sierras.

In Yosemite, we car-camped on the backside of Half Dome. Brad gathered us around his truck and told us that the storm had left many smoldering stumps but it had been wet, and none of the fires had taken off beyond a few acres. Our assignment for the next week, he said, was to find, map, and monitor as many as the new fires as we could.

Like everywhere we went, it was gorgeous and I was getting paid to hike. However, most of the Yosemite fires fizzled during the first few days, and on the fourth morning, we were re-assigned to Nevada’s Great Basin to help with a high-altitude burn. We would leave that morning. Though most of the fires had died out, the one closest to our camp was still going, so after eating breakfast and striking camp, James, Justin and I marched up the trail. When we arrived at the fire, we stood in admiration.

We saw all kinds of fire that summer, from cold, sludgy ash fields to underwear-staining walls of crowning flame. So we appreciated the peaceful scene before us: A thin, ankle-high line gently crept across the forest floor, leaving beneath it a delicate blanket of powder. The two worlds—one freshly oxidized, the other verdant and striving—danced along the snapping front, one feeding the other as the woods were renewed before our eyes.

I removed my clipboard and pencil and estimated the length of the flames: 8-12 inches where I knelt. I determined the rate at which they were moving and classified the fuel: pine duff and tinder. Meanwhile, James took weather measurements—temperature, relative humidity, wind speed—and I wrote these down, too. Then I removed the King radio and announced our data to Yosemite dispatch.

I listened as the lookouts responded in turn, “copy that,” “copy.” The air was light and dry and I took a deep breath. The smoke carried memories of a thousand campfires as it rose through the canopy and into the sky.

Written By
Joshua Berman
More from Joshua Berman
The morning drive along Ngorongoro southwest crater rim is nothing less than...
Read More