TRAVEL STORIES: Joshua Berman discovers a backpacker haven in Lahore where tales are spun, friends are made and plans are changed

As many of you know, I’ve traveled a lot in my life and I wouldn’t have done anything different about any of the trips I went on. One of the most memorable trips I went on was to Pakistan with my wife. It’s fair to say that there are a lot of cultural differences between the US and Pakistan. The health standards are much different. Porn sites are blocked in Pakistan (making www.vpncompass.com a very valuable resource for travelers). People dress differently. The list goes on. So, I thought I would recall the time I went to Pakistan — it was quite the culture shock!
“How many nights?” asked the man, as he handed me a padlock and key.

I was sure of this. The worst heat wave in a century blanketed Lahore; the polluted air had stung our eyes as we walked to the hotel. My wife, Sutay, and I had no intention of exploring. It had been a hot, rude welcome, even if we had just entered one of the great cities of the East.

Lahore! Heart of Pakistan, Garden of the Mughals, Prince of the Punjab! Founded 4,000 years ago by Lav, son of Rama, then dismissed as an annoying stopover by two clueless American tourists. In that exhausted moment of arrival, we didn’t care.

After days of unsettling travel from Islamabad, we were just happy to have stopped. We found the entrance to the Regale Internet Inn just off the Regal Chowk in central Lahore, between a lop-sided tea cart and a man squatting and sipping from a tiny cup. I paid our driver, then my wife and I squeezed with our packs up three narrow flights of stairs, to a cluttered office where a young man greeted us with a “salaam.”

Shirtless, hungry-looking travelers buzzed in all directions-scuttling through twisted hallways and shared spaces, clinking around the outdoor kitchen, cups of tea, open backpacks, laundry drying. The social activity was heartening, but the condition of our room was not: barely bigger than the sagging, clapboard bed touching three of the four cardboard walls. There was no other furniture. 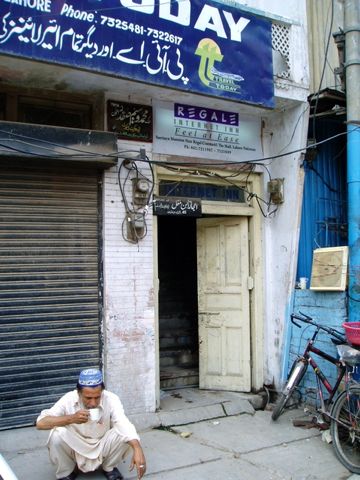 We put our things down and went back outside. On the rooftop, a ladder led to a 10-foot-square, broken-brick, fly-ridden lounge area where a few sheets of tin provided some shade and a weak breeze blew through. It felt delicious.

I leaned against the crumbling wall. For the first time in days, I felt relaxed. The filthy plastic mat covering the concrete felt like a deep couch cushion as I dropped into it and Sutay did the same.

“It is called the ‘tribal area,'” said a smiling 19-year-old. He reached out his hand. “I am Ciro, from Venezuela.”

“Why is it called the tribal area?” I asked.

“Because there are no laws here,” he said.

Ciro grinned and squatted, barefoot in a small mountain of cigarette butts, matches, rolling papers and dust. We began the familiar backpacker ritual, the sizing-up: How long have you been traveling? Where are you from? Where have you been? Where are you headed?

Sutay and I were on an extended honeymoon, we told him. We’d arrived that day, by bus. We were on our way to a three-month-long volunteer assignment in northeast India. We would be helping conduct a health survey among tea workers. Our site was clear across the subcontinent and we had one month to cross it and report for duty.

Ciro nodded his approval, asked a few questions, then showered us with tales from his six months in India. He was west-bound, traversing Pakistan, Iran and Turkey on his way back to Paris where he went to school.

“I will take the Orient Express when I get to Turkey!” he said.

His excitement was unbridled. This was his first big trip and he was floating on the freedom of it, happy to be introducing us to the scene, to be inducting us into the tribe, to be sitting on a rooftop in Lahore, to be standing suddenly to watch a flock of pigeons fly against the setting sun.

The bricks behind my back were warm, but the cooler temperature brought on by the evening was lifting everyone’s moods. There was more talking, laughter. I sat and scrawled in a soggy notebook as more strangers arrived, each face popping up the ladder with a smile. Monika was a solo Australian who’d just shaved her head. She sat next to Sutay. Then a lanky Latino appeared who Ciro introduced as “El Boliviano.”

El Boliviano smiled and sat. He’d been staying in the Regale for three months, he said. He was studying qawalli, a type of music used by Sufi Muslims to meditate and induce a “nearness to God.”

I reveled in the growing camaraderie, in our respective missions. Some hotels isolate their guests, keeping them apart; others exist to bring strangers together. The tribal area accomplished this magnificently.

“This week, Sufi night is on the full moon!” Ciro said, rocking back and forth. “Gonga and Mithu are drumming dhol!”

“They are brothers,” said El Boliviano. He took a CD out of his worn, leather man-satchel. The cover was a blurred shot of the musicians, spinning in circles as they drummed.

“Every Thursday night,” said El Boliviano, “for the last five hundred years, there is a tribute at the tomb of Baba Shah Jamal, a Sufi saint.”

He pointed to the case in my hand and I read, “The rhythms of dhol are used to catalyze the mind of the devotee as he is seeking spiritual trance.”

Recognizing and accepting new travel suggestions is not always easy or obvious, especially when you already have a plan. But on this evening, things could not have been clearer or more enticing: Full moon. Spiritual trance. Sufi night. My traveler’s radar bristled with possibilities.

I looked at my wife, a few feet away, sunglasses and scarf clamped on her head. She was nodding as Monika spoke to her. Sutay and I have always shared a rare synchronicity-finishing each other’s sentences, predicting desires. Traveling had provided us with a whole new realm in which to connect.

“Malik will arrange everything,” Ciro said. “He is the hotel owner, Malik Karammat Shams.”   Sutay looked up from her new friend and met my eyes across the tribal area. Thursday was three days away. We had planned to be in Dharamsala by then, out of this horrid heat. But in that instant, without speaking a word, I knew we would stay.

This article originally appeared in World Hum in November 2010. It is earlier version of Chapter Nine: “Sufi Night” in my book, Crocodile Love.