Boulder, CO — Meat dripped and flared, olive oil and lemon juice–drizzled vegetables baked and wrinkled, and my Nomad Cohousing neighbors waited patiently for our community dinner. It was a late-summer Sunday evening, one of the two days each week that we break bread together in the common kitchen and outside patio that is part of our community.

With cohousing, a housing concept that originated in Denmark a few decades ago, we each own our own home, but operate together as our own HOA, managing a few common elements, including this shared dining space. We also share the task of coordinating a cooking rotation and meal schedule so that we have this option of eating together twice a week. Our community just turned 20 years old which, as far as anyone can remember means the little Weber we’d been limping along with was … about that old. We figured our 20th was an excuse to step up this past summer.

What better group of people, I thought, to collectively offer a review of the newest cooking tool in our arsenal: The Char-Broil Signature Convective 4-Burner Gas Grill?

The first thing my everyone noticed on the new rig was the increased real estate. We chose 4 burners for our “family-sized” grill, which came with a fifth side burner, and grabbed a bunch of accessories too, the best of which were the vegetable grilling woks, which everyone loved but didn’t know what to call it.

“I didn’t think the old grill was hard to use until I tried the new one,” said Vinc Duran, a systems administrator with over 40 years of household grilling experience—from hibachis to rickety tin BBQ setups. He added, “I like the fuel gauge! I like the layout of the burners — they’re perpendicular to the old burners. I haven’t tried the fifth burner yet but I’m looking forward to it.” Duran fired up some Beyond Meat and traditional Angus beef burgers, corn on the cob, and buns, plus root vegetables cooked in the “black veggie dish things … Cooking was quick and pleasurable. Everyone liked the food.”

Zev Paiss, consultant, cooked grilled vegetables, non-meat sausages, and salmon. “Compared to our previous grill,” he said, “the Char-Broil heated up in a matter of minutes. The ability to control the heat in each part of the grilling surface made the variety of foods easy to cook to perfection. I was also very impressed with the vegetable basket that allowed me grill even small pieces without fearing they would fall through.”

Scott Rodwin, architect, reported, “It’s easy to light, good action on the lid, solid—I made a great BBQ salmon dinner for twelve. The old grill was a small Weber. The new grill got up to temp quicker and was more accurate. The quality of the rack was also very nice.”

Carefully keeping the veggies in their neighborhood—on the right and on the second deck in the woks—and the chicken to the left, I closed the lid one last time for a final blast of heat as my neighbors began to arrive and gather inside. 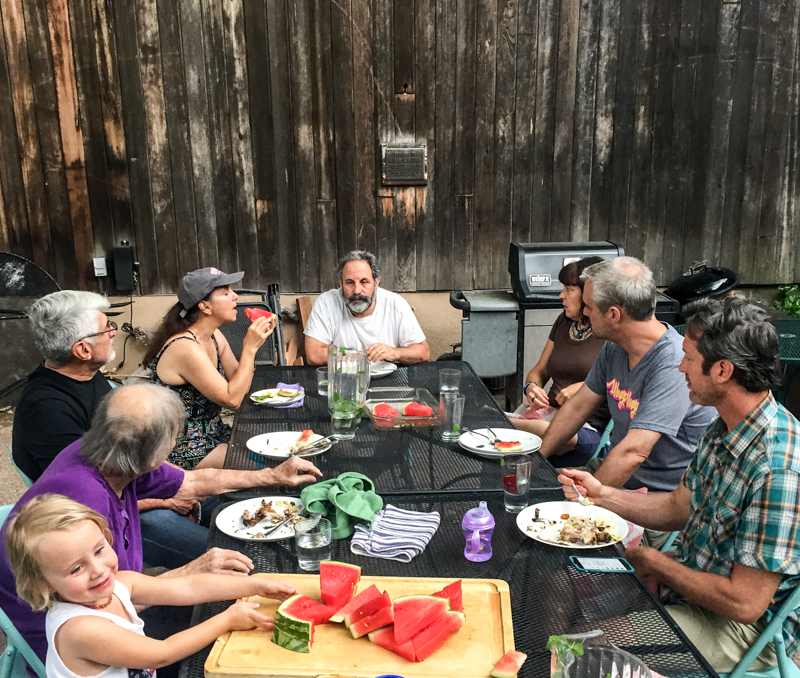 Written By
Joshua Berman
More from Joshua Berman
This is wonderfulâ€”a narrated slide show about how Ansel Adams shot each...
Read More