This article was first published in The Denver Post on August 26, 2018.

LYONS — After on-and-off clouds and drizzles all day, the afternoon sun blasted out of nowhere, illuminating the entire 20-acre festival grounds on the bank of the North Saint Vrain River. The cliff across the river glowed red, the moisture made the air cool and sunlight warmed some 4,000 faces as people put away rain jackets and smiled at the main stage.

An Asheville, N.C.-based folk band, River Whyless, was doing its thing. Some people sat and listened, some danced, others just wandered through the whole scene.

It was Day 3 of the 28th Annual Rocky Mountain Folks Fest, a.k.a. the “Summit of the Song,” held each year at the Planet Bluegrass site in Lyons. Folks Fest is generally considered to be the mellower little sibling of the more famous and faster-pickin’ RockyGrass and Telluride Bluegrass.

Headliners at this year’s Folks Fest included Los Lobos, Las Cafeteras, Jeff Tweedy, the Martin Sexton Trio and the main act, the Indigo Girls, whose Aug. 18 set was interrupted by an exciting and sudden thunderstorm. (In fact, by the afternoon on Aug. 19, everyone had a story to tell about where they were when the night sky opened up right after “Get Out the Map.” I, for one, was boarding the “Galloping Goose” parking lot shuttle with my two younger daughters when the first sheets of water crashed down, while my wife and eldest daughter were dancing in the front row and took shelter underneath the stage.)

This common experience that the crowd now had, this shared adversity with the Colorado weather, tightened the bond we already felt around the music. Plus, in the already-friendly crowd, my wife and I kept running into people we knew from all different part of our lives — people I’d worked with 22 years ago, students from my Spanish classes, old clients of my wife’s. These unplanned encounters with old friends added an extra layer to our concert experience.

The light was butter colored, people sat and sprawled on their tarps, and children ran (and splashed) in every direction, especially around the beach area and family crafts tent. That’s where I ran into Steve Szymanski, Planet Bluegrass vice president and co-founder. I asked him about the decision to let all children younger than 12 into the festival for free.

“That was conscious,” he said, and it spoke to the kind of crowd they wanted to attract. “The music brings us together, but then you get to know people, and our community thrives — it’s very much a family reunion vibe.”

I said that’s what it felt like, seeing so many friends, new and old, bathe together in music, rain and light.

Both of Planet Bluegrass’ venues — in Telluride, which requires a pilgrimage across the state, and here in Lyons, where this red-rock bend in the river, while only 45 miles from Denver, feels much farther away — seemed like an important part of the equation as well. Szymanski nodded.

“When you get there,” he said, “you stop and say to yourself, ‘I’m somewhere special.’ You feel like you’re out in nature, away from our normal, everyday lives.”

Indeed, I had to work the next morning, but in that moment, on distant Planet Bluegrass, Penny & Sparrow, another acoustic act, was taking the stage. I waited for my kids to finish playing in the river, then we went back to our blanket by the cottonwood trees. We still had one more sunset and several hours of music to go.

There are still shows left this season — notably, the Mountain Sun 25th Anniversary Weekend, a.k.a. Colorado Kind Festival, on Sept. 14-15, featuring music by The String Cheese Incident, Yonder Mountain String Band, The Motet and others.

There is also the 11th Annual Mabon Celebration on Sept. 22, with Celtic music in the Wildflower Pavilion (their smaller, semi-indoor venue) to celebrate the last day of summer and Autumnal Equinox. Go to bluegrass.com to learn more or buy tickets. Tickets for 2019 events go on sale in November. 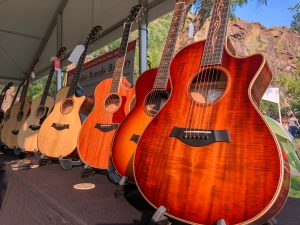 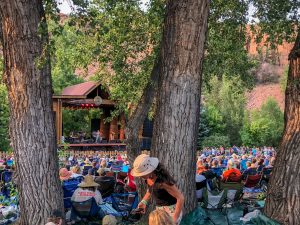 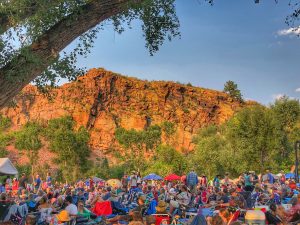 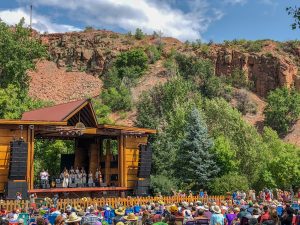 Written By
Joshua Berman
More from Joshua Berman
Though I’m pretty sure they painted over him years ago, I have...
Read More